In 1932 it became apparent that the Southern Conference was too large and unwieldy for good competition. A division along geographical lines was agreed on by representatives, and the Southeastern Conference (SEC) was formed consisting of Alabama, Auburn, Florida, Georgia, Georgia Tech, Kentucky, Louisiana State, Mississippi, Mississippi State, Sewanee, Tennessee, Tulane, and Vanderbilt.

Coach Bill Britton and Captain Ernie Clark guided the Tennessee trackmen through the 1933 season to four wins and only one defeat at the hands of Alabama. In the first SEC meet Chauncey Stout, who had been a Knoxville High School track star, won the mile in a record time of 4:22.7. Harold Wolfe won the half-mile also in a record time of 1:56.5. Herman Woodall placed third in the two-mile to complete Tennessee’s scoring.

The 1934 track team, sparked by Nelson McCarroll’s record javelin throws of over 169 feet, opened with victories over Maryville and Davidson, a loss to Alabama, a victory over Kentucky, and then a smashing victory in the first Tennessee Intercollegiate Athletic Association (TIAA) meet that was limited to teams from the state. Against the TIAA opposition Will Pritchett pole vaulted 12’-0¼” for a new school record and Dave McPherson high jumped 6’-0 ¼” for another school record.

The Vols of Coach Britton and Captain Herman Woodall had another banner year in 1935. Victories over Davidson, Maryville, and Kentucky, the annual loss to Alabama, and a second victory in the TIAA highlighted the season.

In the 1935 SEC meet Harry Anderson finished second in the 100 yard dash with a 9.9 clocking and second in the broad jump at 22’-9¼” (both school records). Eli Ellis jumped 22’-8½” for a fourth place finish. Fifth place awards were won by Glenn Jeffries in the javelin with a 174’-3½” school record throw; Clarence Blackburn in the low hurdles; and William Maynard in the mile. The mile relay team also finished fifth.

The 1935 freshman team, better known as the “Rats”, broke every freshman school record and won their division in the SEC meet. Dan Pick ran 440 yards in 49.5 seconds for a school record and the mile relay team of Dan Pick, Ralph Overholt, Harry Epperson, and Red Harp ran a 3:23.3 for another record. The freshman relay time was only three-tenths of a second slower than the winning varsity time.

Harry Anderson ended an amazing track career at the University of Tennessee with four school records and a total of 24 points in Southeastern Conference meets. (10)

Captain Sam Hansard and Glenn Jeffries took the Vols only points in the 1937 SEC meet to climax a season that resulted in a fourth straight TIAA victory and a 2-2 dual meet record. Hansard placed fourth in the SEC two-mile and Jeffries hurled the javelin 192’-6” for second place.

In his last season as head track coach Blair Gullion’s team again won the TIAA meet and two of three dual meets. Russell Curry pole vaulted 12’-5¼” against Maryville for a new school record and Captain Dan Pick won the half-mile with a blazing 1:54.7.

John Barnhill returned to coach the Volunteers in 1939 and ran into disaster. The Tennessee trackmen lost to Maryville, Alabama, and Vanderbilt; tied Kentucky; and then slumped to third place in the TIAA meet. In the SEC meet they were almost shut out and came home from Birmingham with only Ed Cifers’ two points in the javelin to show for their efforts.

During the 1940 season, with Willis Tucker rolling up the points, Captain Ed Cifers’ Vols beat Emory & Henry, Maryville, Tennessee Tech, and Kentucky; won the TIAA; and bowed only to Alabama. School records were shattered by Willis Tucker, 24.7 in the low hurdles; Ted Kinney, 14’-3” in the discus; and Bernie Mehen, 6’-1½” in the high jump. Edward Marks (third in the two-mile), Willis Tucker (fifth in the 100 and 200), and Bernie Mehen (six way tie for fifth in high jump) were Tennessee’s only place winners in the SEC meet.

Willis Tucker, star center on the football team, was the leader of the Vols during the 1941 season. This was to be the last season before Pearl Harbor and World War II – a war from which Lieutenant Willis Tucker would not return. (11)

Sporting a 3-2 record and another TIAA victory, Tennessee rolled to fifth place in a tough Southeastern Conference meet. Willis Tucker place third in the 220 yard low hurdles with a 24.2 time and fifth in the 100 yard dash with a 9.8; Ted Kinney won the discus at 141’-5/8” (2 3/8” short of his school record set in the TIAA meet); Bernie Mehen tied for second in the high jump at 6’-1 5/8” (1 5/8” short of his school record); David Romine took fourth place in the shot put at 45’-3¾” (short of his best throw of 46’-9” in the TIAA); and finally the mile relay team sprinted to a school record of 3:22.2 and a third place finish. Warren Vick, Lester Campbell, Ted Beeler, and Gordon Magee were members of the record-holding relay team.

It was a dark year for Sim Efland’s 1942 squad. The war that had begun the past December following the attack on Pearl Harbor had not yet reduced the enrollment at the University of Tennessee, but sports were no longer so important. Nevertheless the Tennessee track team beat Tennessee Tech and Kentucky, won the TIAA title once again, and lost only to Georgia Tech and Alabama. In the SEC meet David Romine took third in the shot put at 45’-7¾” and third in the discus at 134’-1¾”. Howard Shofner placed fourth in the javelin at 164’-9’.

The war was over and the veterans would soon be coming home. Once again the athletic field would be the place for battles to be fought. The smoke and dying would pass away and a bone-jarring block or fast 100 yard dash would take its place. Once again track would be important. 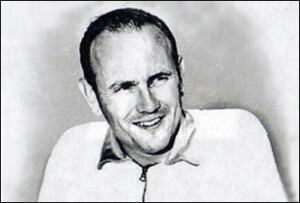